The seven-lift total: continental weightlifting competitions at the turn of the century

Aris DeMarco
This is part of a series that'll include both 'iron game history' and 'lifter profiles', the first is here: Marvin Eder

The 'old(e)time strongmen' are always something of a hot topic in the strength enthusiast's world. I mean, what's not to love about the oversized stage weight-toting, heavy overhead lifting, beer-swilling, mustachioed, leotard-wearing weightlifters who started popping up everywhere near the end of the 19th century? 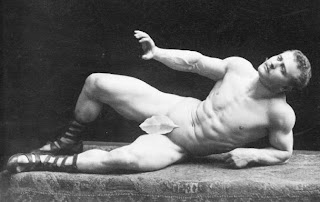 "Clothing? Oh no, thank you, I couldn't possibly ask you to go to the trouble..."

The fact that wearing both a fig leaf and gladiator sandals, with nothing else but a mustache, as Eugene Sandow (pictured) was wont to do, is a bit of an overkill, I'll chalk it up to the fact that the Victorian era was a bit of a strange time, especially in terms of their various homages to the classical era, and leave it at that.

Anyway, wardrobe choices aside, as a group the 'turn of the century strongmen' were a seriously powerful group of guys. For lifters today who have a bit of nostalgia for the drug-free era of overhead lifting-obsessed European fellows, there are, of course, two relevant questions that everyone asks:

1. What did they lift, really? After all, numbers were often exaggerated, and fake weights were very popular in stage and circus shows.

2. How did they train?
This latter question is especially relevant when we consider the fact that some of these fellows could lift prodigious weights in a manner that no one today can duplicate. The most commonly used example: Arthur Saxon and his 370-pound bent press. 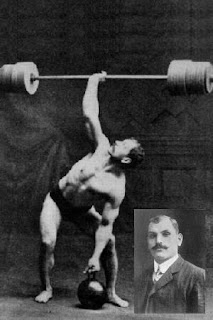 Saxon definitely deserves a 'lifter profile' written about him....

At the time, weightlifting competitions were not really regulated as of yet, but in Germany, Sweden and Eastern Europe, a 7-lift competition was the most popular (In his book The Super Athletes, which I'll reference heavily, Willoughby says that 8 lifts were involved, but only lists seven):

The lifter with the highest total of those seven lifts was, of course, the victor.
Now for a bit of explanation regarding the lifts themselves.... 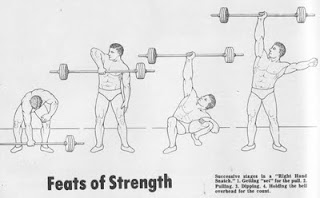 The one arm snatch was done squat-style, which enabled the use of some pretty fair poundages. Many lifters could one-arm snatch their own bodyweight or more.

The one arm jerk was done 'continental' style--in this case, taken to the shoulder with two hands; with the lifter's elbow resting on his hip, or the bar on his shoulder, and jerked overhead with one. This, too, was done in a 'squat' style. In most cases, it seems that a skilled lifter could one arm jerk roughly the same weight he could military press.

The snatch, of course, should require no introduction--it's the same two handed barbell snatch used in weightlifting today. Of course, given the size of the bigger lifters in Europe at the time, and their general lack of flexibility, it's unlikely that they would have been able to do full squat snatches. Press-outs likely would have been allowed as well, though to what degree I'm not sure. Either way, these were most likely shallow power snatches.

The 'continental', of course, referred to the method of bringing the weight to the shoulders. The barbell was either lifted 'clean' to the shoulders (like a power or squat clean), which at the time meant not contacting the body on the way up; or it was 'continentalled', i.e. touching the body on the way up. Most lifters rested the bar on their stomachs and from their boosted it to their shoulders. It's still commonly used to shoulder heavy thick barbells, too heavy to power clean, in strongman competitions today.

The 'continental press', unlike the 'military press'--in which the heels had to be together, and no back lean was permitted--allowed an unlimited degree of back bend, and the feet could be spread wide or 'split' for balance. Anything really, as long as leg drive was not used. 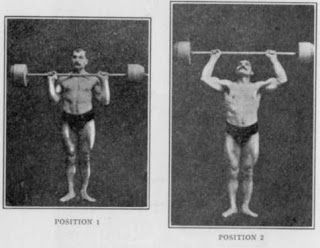 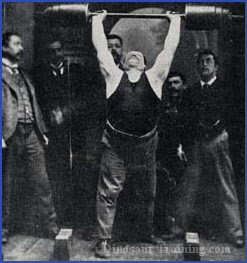 Finally, the 'continental jerk' was brought to the shoulders in the same manner as the press, and then jerked overhead with leg drive and a catch at lockout. It's worth noting that many of the strongest European lifters were so large and relatively inflexible that they did not split or squat under their jerks, instead using a 'heave press', i.e. a push press followed by laying back under the weight and pressing it out. Moreover, they did not yet have the 'double layback' technique in the press that eventually got it banned from the olympics.

Looking for numbers to beat? Here are a few of the more notable 'continental' lifters of this period: 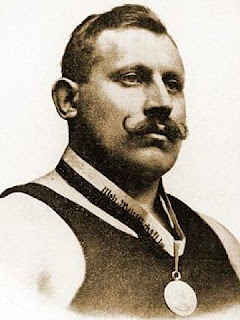 Dan John wrote that "if all you did was clean and press, you could be awesome." Steinbach was a living example of this--as well as being the archetypal big, brutish, not-very-technical European lifter in the 1900s. He did all the competition lifts, but as you can see by his official records, he really liked pressing.

As you can tell, given the "relatively slight superiority of Steinbach's jerks over his presses" (Willoughby) his jerk technique was most likely the aforementioned 'heave press', similar to what Zydrunas Savickas does (see video above). 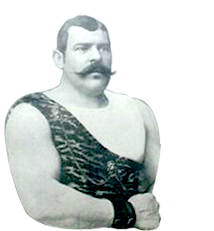 Goerner was more than a little awesome. He mainly lifted in the 1920s and '30s, after the 'first generation' lifters I mention above, but he did many of the same lifts so I'll reference him as well. I'll also definitely be writing an article about him in the future, anyone who can 'dance' with an elephant (pictured) as part of his performing strongman routine deserves to have his training studied, don't you think? 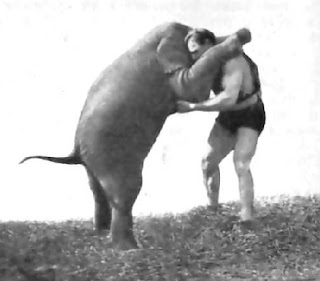 ...So there you have it. A bit on how (and how much) they lifted, some numbers to chase, and some history, as well! Part II is now up here.

I hope you enjoyed the article--comment or email (affectinggravity@gmail.com) with questions, or stuff you want me to write about (subject list here), and subscribe to our youtube channel.

Posted by affecting gravity at 8:59 PM