I’ve read many times about making the distinction between training movements or training muscles. I think the main point is that the ones who regard themselves as athletes or functional train movements and bodybuilders, fitness models and regular beach buffs train their muscles.

What is a movement? – I train to be strong in the squat!

What is a muscle? – Today, I’m training quadriceps, glutes and hamstrings!

The difference lies in what you’re trying to accomplish. If the movement is your focus, you’ll do whatever you need to get better and stronger in that movement, even if that means less visual difference. Such a thing may be the bench press with an arched back and a close grip.

If the muscle is your goal to work, you’ll do whatever it takes to stimulate growth in that specific muscle, disregarding how strong you get in a certain movement. Bench pressing with a wider grip and a flat back and slower tempo to fatigue the pectorals.

I have been thinking in movements a long time now because I think that when training mostly bodyweight and gymnastics, it’s hard to isolate a specific muscle. I also get more joy and fun out of training for a skill, rather than a pumped muscle!

Lately though, I have been thinking more about muscle. Not as in I dream of Arnold (not every night, at least) but as in I’m starting to contemplate what I get from training. What I carry with me after working a movement very hard, except for mastery of that specific movement of course.

One BIG aspect is what I call carryover. I’m talking about, for example, if you train your body to achieve a one arm pullup over a long time – what else can you do after that? I know I could do a bar muscle up the first time I tried it. I could almost hit an iron cross on rings. Hands only rope climbs were downright easy. My front lever holds became better with very little direct work. 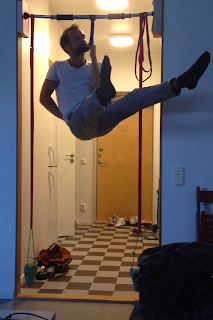 Training in my ninja dojo. Has carryover to everything you can think of.

Of course this is not only carryover from one arm pull-ups but from the many hard sessions of core training, handstands, lifting weights and my endless grip training I do each week. But it’s a very fun state to reach, when you can try new (and sometimes pretty advanced) stuff and learn it really quick and reap benefits right away.

It’s fun to train movements, but I've started to recognize that it is also the muscle strength that give you the carry over and perhaps get some great gains in strength and skill when you try nre stuff. So, if you're not competing in a certain lift, why wouldn't you train in way that strengthens all the muscles involved and get you as all round strong as possible?

1. build a base with good compuond exercises, perhaps my basic bodyweight routine in The minimalist series
2. get awesomely strong at that and start to test new exercises, perhaps gymnastic movements
3. identify what muscles need to become stronger to get ever more awesome, and work them specifically, perhaps using stricter form, similar movements as the ones you train, or isolation exercises.

I always keep my base the same. Chins, pushups, squats, lifts. But I also keep a portion of weak point bodybuilding, as I call it, in my training. Right now, I’m working my shoulders a lot with lateral raises and reverse flyes. Not just to get big deltoids, but to get better handstands, pull-ups and ring training.

No right or wrong here. Just doesn’t have to be “either/or” when it comes to training, especially if you are training to have fun with a lot of different things!

Posted by affecting gravity at 12:09 PM