Continuing with the 'athlete profile' series, I figured it was time to introduce a woman into the mix and spare everyone another blog post featuring men in gladiator sandals. 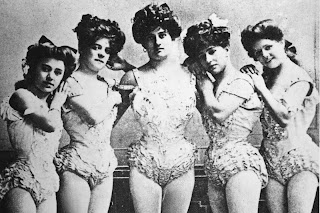 Not sure if this is any better, but you can't say I don't try...
...our heroine is on the far left of the picture

In the early 20th century, strength-based physical culture was beginning to spread rapidly among the male populations of both Europe and the United States. However, among women it was virtually nonexistent, the traditional arts of dance and acrobatics were still basically the only athletic pursuits females engaged in. Aerial performers (ring and trapeze artists) were the big draw at circuses and many of these artists, like the performing strongmen, pushed their boundaries to do something new or exciting in order to succeed.

At the time, though the rings were not nearly as sophisticated in terms of needing pure strength as in today's gymnastics (I believe that change came with Albert Azaryan's cross obsession a few decades later) they were still very much a 'male' art, requiring more strength than most women had or cared to develop.

Lillian Leitzel was born in 1892 as Leopoldina Alitza Pelikan and brought up by her grandparents in Germany. She was trained in music and dance and became fluent in several languages--several of her instructors believed she would go on to become a professional pianist. However, she began teaching herself acrobatics and at the tender age of 14 joined her family in the circus, performing with her mother and two aunts. She cared nothing for her stereotypical role as a female aerialist, though, and eventually created something a bit more demanding as a performance routine. 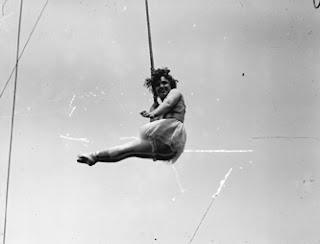 In 1910, Leitzel moved to the United States and performed with Barnum & Bailey. Her primary routine was done on the rings like those of the male performers, but unlike most other routines hers was done fifty or more feet in the air, without safety nets and only a thin rubber pad to break her fall--of course, from that height, most mats would be doing more breaking than padding, so such a safety measure was dismissive at best!

Leitzel quickly became known for her quick temper, flirtatious performing style, and tremendous strength. She was reputedly able to do 250 'back revolutions' (a sort of 'one arm dislocate', or momentum-aided 'skin-the-cat', seen at 1.40 in the video). One of her crowd-stealers was to encourage her audiences to count each repetition with her as she did them, swinging around and around in quick succession. She could also do 27 consecutive one arm pullups on one of the rings; David Willoughby states that these one arm chins were undoubtedly done with a high degree of swing or 'kip', but that Leitzel could probably do, at most, 6 strict one arm chins (he worked this out by comparing her to a contemporary male gymnast with one of his typically complicated mathematical formulas). This is still mindblowing, of course, for a female athlete--an excellent effort for any athlete, for that matter, and would make Leitzel perhaps the most capable female athlete of all time when considering this particular feat of strength.

Something else worth noting is Leitzel's 'behind the back holds' (seen at 1.03) which also seems to be a typical move for male acrobats--I've seen cirque du soleil extraordinaire Igor Zaripov do it in several of his performances:

Taken together, Lillian's feats show that she had a very high degree of strength and flexibility throughout her shoulder girdle, arms, and hands (though I'm assuming she used straps to hold onto the rings for some movements) as well as excellent coordination and flexibility throughout her entire body; and, of course, a complete lack of regard for heights. Moreover, they show that she can be favorably compared to a male acrobat in terms of ability for many movements, which is insanely impressive for an athletic endeavor that mainly involves upper body strength.

As far as her personal life is concerned, I wasn't able to find out much just through the internet. Apparently she married several men (in succession) out of a constant line of suitors, never bore any children, and eventually died during a performance in Copenhagen when she was 39--through no fault of her own, I might add--the rope holding her snapped at its base. I suppose adding a safety net to her performances at some point would have been prudent, but Leitzel doesn't seem the sort to have cared for that kind of thing at all.

In short: Lillian Leitzel was smart, talented, succeeded in a highly competitive field of showbiz through nothing but her own raw talent and hard work, eschewed the commonly accepted limitations of female physical ability, and continued performing in front of adoring crowds until she was nearly 40. 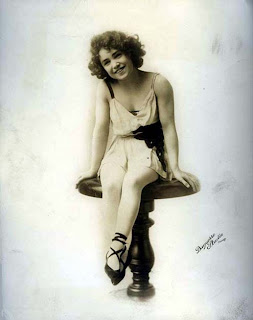 Get after it, ladies.