Conversation with an Olympian

This is Arsi Harju.

Gold medalist in shot put at the Summer Olympics in Sydney and bronze medalist at World's the next year. His best throw ever was a staggering 21.39 meters--73 feet with a 16-pound weight.

Arsi came to train at the gym where I work in Tucson for a little over a month with another elite Finnish shot putter, Suvi Helin. Watching them train was cool enough; but I was also able to get one long conversation with him in between some of his lifting the week before he left. Unparalleled genetics aside, one doesn't get an Olympic gold by collecting bottle caps especially in an event with such a long and hotly contested history as shot put; so Arsi's insights are worth remembering.

On that particular day Arsi was doing pulls and squats. That was what he generally did, actually--the only lifts I saw him perform over the course of the entire month were:
-Squats (front or high bar back, no belt, no special shoes, done very upright with a completely full range of motion, for sets of 5 or so. I saw him do a little over 180kg for on back squats and something between 160 and 180 on fronts)
-Pulls (generally shrug pulls with a clean grip, for sets of 2-3)
-Power snatches (always done very light)
-Close grip benches (usually working up to a top single. The most I saw him do was 355 but he apparently did 375 on another day. These were done with a big belly bounce and no pause but not a lot of leg drive)


I took the opportunity in between to ask him what his best deadlift had been when he was competing. "Two-eighty," he said. I remarked that making 240 and just missing 260 was pretty good, considering that he had not been training too seriously since then (he had previously explained to us that he really just lifted "for fun" now since he was coaching Suvi).

"Well, yes," he said thoughtfully. "You know, if you do your homework... work hard... don't put anything in your ass, strength stays."

His overall attitude was pretty exemplary of that philosophy. Train simply, work hard, stick to the basics. I didn't ask for clarification about drug usage, of course; but I did ask him about what his training was like when he was competing at his peak. "Lots of throwing," he said (I'm not sure if Finnish has an equivalent expression to 'duh' but his expression reflected it), "lots of running. And lifting.

"We trained three days, hard, twice a day. Throw in the morning; sprints, throws, then easy sprints. Lift at night. "
"Every other day?" I wondered.
"No--Monday, Tuesday, Wednesday."
"Three in a row? You must have been very tired by Wednesday."
"Yes, but then four days, easy. Aerobics. massage."

When I wondered about the lifts they did: "Not so much deadlift, pull... lots of squats, and press" he made a bench pressing motion and then added a word in Finnish and mimed throwing a barbell overhead. "Snatch?" I asked. He nodded but did it again, slowly, without dropping under. "Oh--muscle snatch," I said, mimicking him and emphasizing the lack of knee dip. He nodded. "135kg, my best," he said, and then put his hands together. "115kg like this."

I asked if he did any jumping or plyometrics. "Oh yes. Over boxes, boom, boom, boom"--he showed the bouncy, reactive hops--"and I also jump, 320cm." He mentioned that he weighed a little under 300 pounds at the time, so a 3.2m broad jump is pretty revealing of his power at the time even for those of us who don't have a good metric for the shot itself.

He explained that before competition, the change was, of course, more throwing and less lifting. "Throws more important. We sometimes press 5 times in a week, after throws, already warm... easy. Just go up and stop." Apparently the 'one top set' done heavy but not to failure, was a staple as he mentioned "just up and do one" several times.

One other thing he mentioned was strain on the body. The throws impacted the joints a lot more than lifting, and he firmly believed that powerlifting or weightlifting was less stressful than the shock of a throw especially on the shoulder. He also mentioned having a lot of ankle and knee issues, emphasizing how heavy he was when at his peak and how he had to be precise with his footwork in the circle; walking through the motion and pointing at where the torque affected his knee and ankle. 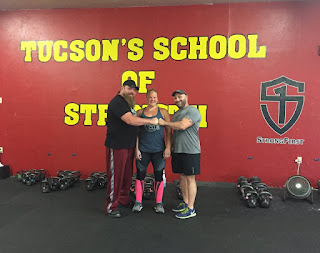 From left to right--Arsi, Suvi, Danny. For reference, Danny weighs about 210 pounds.

In a different conversation, he told Danny Sawaya about how some of those injuries came about. Danny recalls: he said he only sustained injuries in his career when he felt his body slowing down on his lifts or throws and he decided to keep pushing. He also said when he would have a great training session how he learned not to push it and go for more that training session, but to save his energy for his next training session instead rather than over do it.
That was also reiterated to me. Lots of hard work in terms of both intensity and volume in the off season, then more frequent, easier training when a competition approached.

As can be seen, a lot of the training was done by feel. I asked him about those high rep squats and if he started with, "say, 140kg, 20 reps, then next time 150kg...?" "No, we just did them," he answered with a chuckle. The most sophisticated thing seems to be the weekly template of three very hard days and then four very easy days. This meant that the loading/unloading cycle and subsequent supercompensation occurred within a single week, pushing into significant fatigue and then taking time off and bouncing back by the start of the next week. This would give the competitors more opportunities for relatively high end performances instead of trying to put everything on just one attempt per season (or year, or four years) resulting in many smaller 'top' performances trending upwards over time. And of course, the higher volume and intensity sessions in the offseason built strength and size; while the more frequent, lighter, less strenuous lifting sessions in the competition season maintained that physicality without a lot of effort and allowed the athletes to focus on their sport.

The lessons?
1. Well, you're not Arsi Harju. Sorry. There are freaks out there and he was and is one of them. It's important to keep the role of kinda good genes in mind here.

2. Specificity of training. You don't become the world's best thrower without throwing, a lot. And having that big base of general strength and endurance.

3. Sticking to the basics. Eliminating the excess. He threw, he ran, he lifted. Apparently not a whole lot else. The general strength and endurance came from focusing on just a few things, too, he wasn't doing eighty different strength exercises.

4. Keeping the S&C in perspective. Throwers have to be big, strong, and powerful to throw far so their lifting is very important. But, Arsi's numbers, as good as they may have been, wouldn't win him any powerlifting trophies. Nor did they have to be that level.

5. The role of recovery. Training hard and then recovering for roughly the same amount of time to create contrast. Four days of massage and easy jogs? If you train hard six times in three days--you've earned it.

6. The difference between systems and programs. Arsi didn't really follow any precisely pre-planned routines. However, his training structure as a whole was firmly in place and following the principles of that system ensured that he was always heading in the right direction and preparing for his competitions properly. A flexible framework based on a proven philosophy will in the long term be far more useful than a bunch of fragmented short term training programs strung together... find one for yourself.